Queen Elizabeth II was a beloved figure for so many of us around the globe. But for my Paperdoll Review co-editor, Lorna Thomopoulos, a Brit herself, the Queen felt like a family member. Lorna's tribute will appear in Paperdoll Review Issue 85, coming out later this fall.

Our lovely Queen Elizabeth II at Balmoral Castle Paper Doll was created by Julie Allen Matthews for our upcoming magazine issue. Saddened to hear of the Queen's passing, Julie took to her drawing board. She thought it was a natural fit to highlight the tartans of the Royal Family, especially considering she died at her beloved Balmoral Castle. The first is the Balmoral tartan, said to have been designed by Prince Albert and is only worn by the Royal Family. The second is the Green Stewart, designed for King George VI, Queen Elizabeth's father. An icon in every way, she'll be dearly missed.

A great sadness fell upon the nation when Queen Elizabeth II died (1926-2022). Everyone, monarchist or not, was effected. The country’s Rock and in some ways, everyone’s Granny, was gone. We all knew it was coming but even broadcasters had watery eyes and cracked voices.

My earliest “memory” of Queen Elizabeth II is being held in my mother’s arms in 1947 as she, then still a princess, drove down a Durban street in an open-topped car. Actually I do not remember it as I was only one month old but I like knowing I was there. My next sighting was 28 years later as I joined the crowds to see the Queen “Trooping the Colour” in London. She passed by sitting side saddle on her horse, smaller than I could have imagined, resplendent in a bright red jacket and matching lipstick.

The third time was at the theatre where she glided by in a fairy-tale evening gown and diamonds, one in particular twinkling throughout the performance. Absolutely fabulous.

Her sense of duty, sharp mind, humour, humanity and acute constitutional understanding has been acknowledged by everyone.

Aged just 21, Her Majesty declared that she would devote her whole life to the service of her people. “A fair and youthful figure, princess, wife and mother, is the heir to all our traditions and glories,” as an entranced Sir Winston Churchill so poetically put it on her Coronation.

Elizabeth’s extraordinary reign, spanning more than seven decades—longer than any other Monarch in British history—selflessly demonstrated this steadfast commitment to public service.

Always conducted in sartorial elegance—she was Great Britain’s greatest advertisement and the most famous woman on earth.

We are going to miss the gold dust she sprinkled on everything.

Posted by Jenny Taliadoros at 11:45 AM No comments:

More Paper Dolls Than Ever! 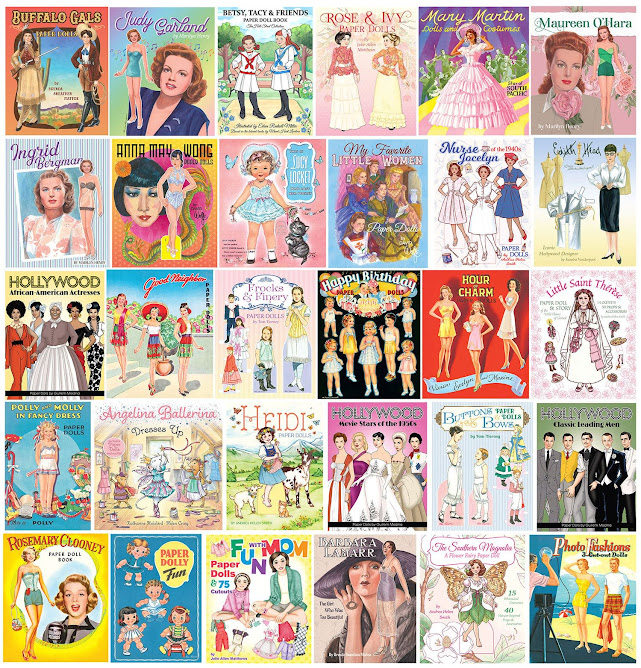 This has been the busiest year ever for paper dolls! To my surprise and delight, so many people have turned to paper dolls to keep busy and entertained at home. Collectors are collecting, crafters are cutting, artists are drawing, friends are gifting, grandmas are sharing, and kids are playing paper dolls!

In March, when we began hunkering down in our homes, I offered a Paper Doll Care Package of 10 books for $25, hoping to spread some paper doll cheer. Through my publishing branch, Paper Studio Press, I had excess inventory on many titles and wrapped up a few dozen bundles, marking each with a heart. Considering sales had been dropping over the past few years, I was expecting 2020 to follow suit. In fact, at the beginning of the year I met with business consultants to form a plan to cut back and lower costs in order to remain profitable enough to stay in business for many years to come.

Adding to the excitement, we've got more new paper dolls than ever before. The collection shown here represents 30 new titles that have come out just in the last few months. All but two were produced through Paper Studio Press and Paperdoll Review including glorious new books by David Wolfe, Marilyn Henry, Brenda Sneathen Mattox, Tom Tierney, Julie Allen Matthews, Guillem Medina and Andrea Helen Smith. Plus tons of wonderful reproductions! I couldn't have done it without the digital design wizardry of Julie Allen Matthews, who has a hand in nearly every book we produce. Check out her Paper Doll School Blog! And find all these paper dolls and more on paperdollreview.com!

Are paper dolls the new trend? I hope so!

Posted by Jenny Taliadoros at 5:11 PM No comments:


Among my circle of friends, colleagues and customers, I have yet to find anyone who's been bored during the last few months of quarantine. I'm grateful to be connected with people who have such a wide variety of interests and talents. Several of my sewing friends have been making masks and donating them to the community. My book artist friend, Penny, completed an extraordinary greenhouse popup book which I'm sure will be accepted into a prestigious show.

With extra time in her home studio, my bestie Bev Micucci decided it was time to put color to paper in her copy of Augusta Dresses Up by Bruce Patrick Jones, published in 2016 by my publishing company, Paper Studio Press (currently out of print). Once she was finished, she gave me a preview via facetime and I was so impressed I asked if I could show off her colored pages here.
This unique paper doll/coloring book represents 130 years of fashions from the Roddis Family Collection donated to The Henry Ford by Jane Bradbury, niece of Augusta Roddis, (on exhibition in 2016-2017). Learn more about the collection in the beautiful book, American Style and Spirit: Fashions and Lives of the Roddis Family 1850-1995, by Jane Bradbury and Edward Maeder, published by V&A Publishing, London in 2016.

I'd love to see more paper doll endeavors from our paper doll community! Send me an email or find me on facebook. And be sure to visit paperdollreview.com for tons of paper doll, coloring and paper crafting fun!

Posted by Jenny Taliadoros at 12:18 PM No comments:


Thank you, thank you to our medical workers! Artist Julie Allen Matthews received a special request to create a wardrobe of medical clothes that would fit her mix-and-match fashion paper dolls sold through her Etsy Shop. Julie could not in good conscious charge for such a page, especially since the request came from a medical professional. So with permission, she posted the outfits to her Blog and asked me to share the set with our paper doll community. Visit PaperdollReview.com for printable PDFs of the pages shown here, and check out Julie's Paper Doll School Blog and Paper Doll School Etsy Shop.
Posted by Jenny Taliadoros at 4:09 PM 1 comment: