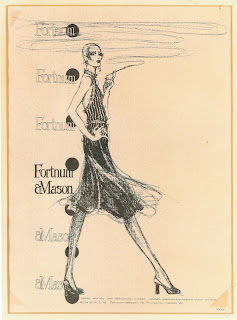 But David had another high profile career in the past. Late in the 1960s he moved to swinging London and became that city's top fashion illustrator throughout the '70s and into the '80s until he returned to America to live and work, leaving illustration behind. During those years he produced high fashion artwork for The London Sunday Times, Women's Wear Daily newspaper, Vogue magazine and many prestigious retailers, including the legendary and history Piccadilly emporium, Fortnum & Mason.

Recently, David acquired a small collection of his original fashion sketches and was kind enough to send me a set of copies. Shown here is one of the full page monthly advertisements from British Vogue, a campaign that lasted over a decade. It features a '20s style cocktail dress by Parisian label, Chloe, then being designed by fashion genius Karl Lagerfeld. For more information about David, visit his Paperdollywood website.
Posted by Jenny Taliadoros at 7:08 PM 2 comments: